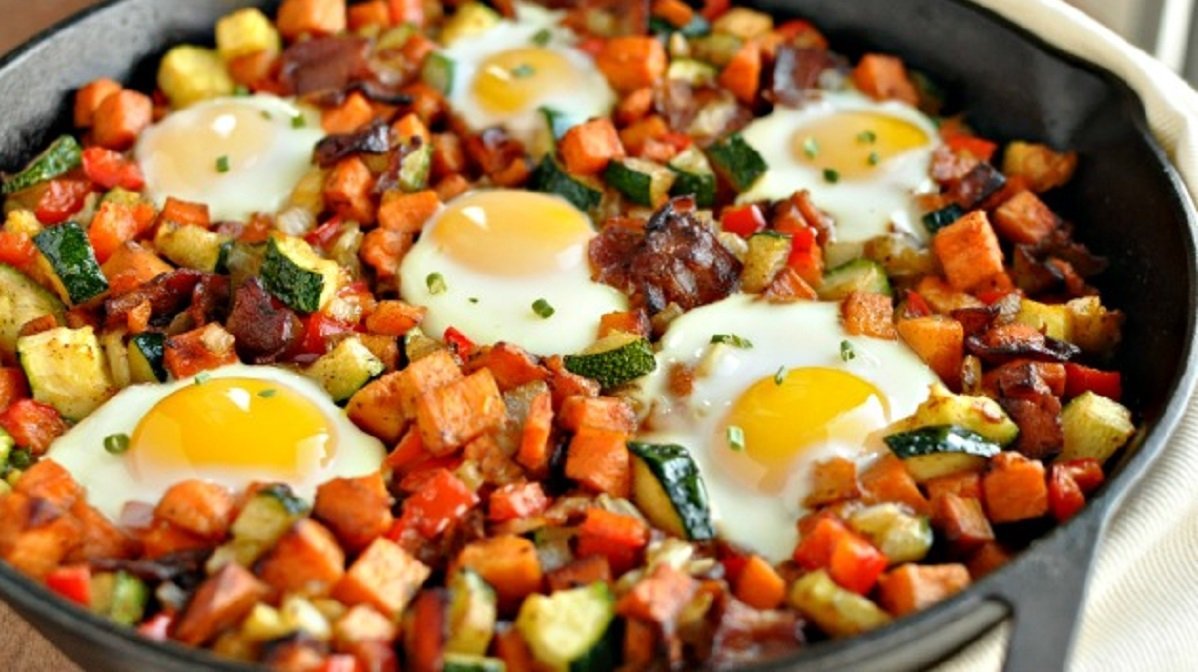 I’m including a recipe introduced to me from a close friend who told me after tasting this Breakfast Skillet, he said he would let everyone know so they could taste and spread the word. While my buddy did eat this awesome meal from a small mom and pop restaurant in Georgia back in 2016, the owners told him they got the original recipe from Allergy Free Alaska. I’m a vegan, so I’ve never had the Sweet Potato and Bacon Breakfast Skillet. However, I’ve passed this recipe on to several people and they all had nothing but good things to say. I thought I’d pass it on to you to see what you think.

-The best pan to use is a 12-inch cast iron skillet. Cook the bacon pieces over medium low heat until crisp.

-Use a slotted spoon to remove the cooked bacon from the skillet. Set aside. Because of the low heat (step 1), there should be enough remaining bacon fat to coat the entire bottom of the skillet. If your bacon did not provide enough fat, add additional bacon fat or coconut oil to your skillet until there is ⅛” of oil.

-Increase heat to medium high and carefully place the diced sweet potatoes in the hot oil. Cook the sweet potatoes (or butternut squash) without stirring until the bottom of the cubes start to turn golden brown; this may take a few minutes. Stir and cook until the cubes just begin to soften.

-Increase heat to high and add the zucchini, onion and bell pepper to the skillet, cook until all the vegetables are beginning to soften.

-Make 6 wells in the potato and veggie mixture, and break one egg into each well.

-Place skillet in the oven and bake for 9-14 minutes, or until eggs are set. Serve immediately.